The art and science of unnecessary radiation has come a long way since I was a boy. The recent New York Times article and the comments thereto don’t quite convey the flavor of where we used to be.

At the end of WWII I was a small boy living in middle class comfort in a not-yet fashionable side street on the Upper West Side of Manhattan. My educated parents, an assistant district attorney and a high school Spanish teacher, cared about my health and promoted it about as well as anyone in their position at the time.

My mother made sure I had orange juice for breakfast, and I had to finish my glass of whole milk before before she administered my vitamins and tonics. Vegetables bought fresh from Mr. Mazella’s shop four blocks away graced our table. My father smoked a pipe, my mother cigarettes. They took me to a pediatrician for checkups.

At every checkup good old Doctor Anderson poked, prodded and listened, but he got the real inside story by performing a fluoroscopy. In a dim room filled with banks of science-fictiony equipment they sandwiched me stripped to my skivvies between a huge machine behind me and a cold flat plate in front of me. Dr. Anderson, who had covered his white coat with what I remember as a thick red rubber apron with a high bib and a hem that touched his shoes, stood across the room.

My mother, wearing her fashionable suit, sat erect on a steel stool beside him. I watched them over the top of the plate as he donned red ski goggles and commanded the machine with a device connected to a cable wrapped in shiny metal. The room darkened. The machine buzzed and hummed as a Halloween image of my bones and organs danced on a screen on their side of the plate. I enjoyed it in a mirror on the wall behind them, reversed left for right.

Doctor Anderson narrated a leisurely tour of my organs, pointing out items of special interest with the same six-foot wooden pointer a later ancient history teacher would use to locate Athens and Sparta on a pull-down map in the front of the classroom. My mother’s cigarette glowed brighter than the image in the mirror as I learned to control the show by holding my breath, swallowing, coughing.

The fluoroscopy was the last diagnostic procedure of the checkup. Inoculations came next, and afterward I dressed so my mother and I could receive pronouncements and prescriptions in twin leather chairs across the huge desk from the doctor. 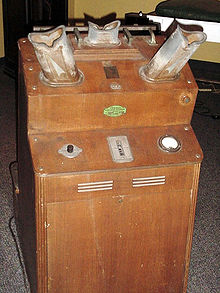 I liked seeing my innards on the screen so much that in later years I went half a mile out of my way home from school to wiggle my toes in the shoe-fitting fluoroscope at a Thom McAn store. Now, of course, I find the idea that Dr. Anderson’s fluoroscopic examination led to any therapeutic decision preposterous, and dismiss the shoe machine as a sad manifestation of a dark age.

No harm has come to me from all that radiation, so far. As an orthopaedic surgeon I wore a radiation badge to track what was going on in the hours I spent around x-ray machines. Now my dentist shields my thyroid and gonads with lead when she makes images of my teeth. As low as the radiation dose from airport backscatter machines may be, the harm is stochastic; that is, every little bit adds its little bit to the risk of harm. I haven’t been offered such a screening yet, but since the complications of a patdown (delay, embarrassment) are easier to get past than the complications of radiation (cancer), I might decline the machine.

It’s good we are more aware of the issues. Everyone should pay attention, and bring to the question of which x-ray to have, if any, the same horse-sense she would employ in buying, say, a new refrigerator.

Fear and ignorance led me to stall for three months between my dentist’s suggestion that I see a periodontist and my doing so. When in the sixties I told my thesis director, an obsessive Austrian with military posture, that I wouldn’t be in the lab the next afternoon because I had to see a periodontist, he barked, “Don’t!” I jumped. Why not? “Once the gum dentists get a hold on you, they never let go!” I took that for a warning, not humor, and declined the attentions that first gum dentist offered, but in the army a few years later, I let a full bird colonel do terrible things to me for reasons, which, in retrospect, did not convince, and after that I steered clear. 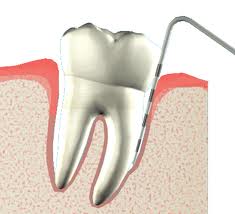 Nevertheless, here I was again with deep pockets and deep pockets. It turned out that the man she referred me to had treated an old friend of mine, who spoke well of him. The periodontist in person was clear, kind, straightforward, young enough to remember his training and old enough for humility about what treatment could achieve. We set a date for him to scale my roots.

He greeted me, acknowledged that my experience of the injection could be negative, characterized the swab and the needle stick to follow as ’little,’ but never said ‘just.’ Once numbness had set in, he went to town on my upper teeth while I, soothed by Donizetti through ear buds, ignored him. I rinsed. Now for the lowers, he said. Is your tongue numb? It was not, nor were my lower teeth. When the block doesn’t work you go high and wide, he said, and injected more anesthetic.

More minutes, but no less feeling. My gum dentist frowned. Let me give it a try, he proposed, but his first ultrasonic dig left me ready to betray the movement and confess anything. Yet one more injection scarcely dulled what I felt when I tapped my tooth and left the sensation of my tongue and the skin over my jaw intact.

Something like this had happened before. Other dentists who had had trouble numbing my left lower teeth opined that I had an anatomical variation that made the block hard to do, but in the end they always succeeded. This periodontist and I stared at each other: it was a node, a moment of decision. I will try to be good, I mouthed carefully, if you will try not to compromise what you have to do.

What followed rated solid sixes and sevens with a scattering of eights and a nine or two for crown jewels. When it was over, my shirt was soaked, my mind addled, yet that second part of the procedure seemed quicker than the upper half. In the afternoon I felt wrecked and couldn’t concentrate so I put in some miles on an exercise bike at the gym. I needed cocktail hour and a night’s sleep to regain my composure.

The next day, with half my mouth still unscaled, I wondered how rare my odd wiring might be. A 2007 article in the Journal of Dental Education quotes an anesthesia handbook to the effect that the standard inferior alveolar block I had is “one of the first clinical skills students learn in dental school,” but it has a fifteen to twenty percent failure rate when properly administered. Another article blames improper technique for more failures than anatomic variation. Other less familiar ways to block the nerve named Gow-Gates and Akinosi may have higher rates of success without more complications, but seem to be used less because “alternatives to the conventional inferior alveolar nerve block remain, for the most part, absent from formal predoctoral dental training in the United States.” 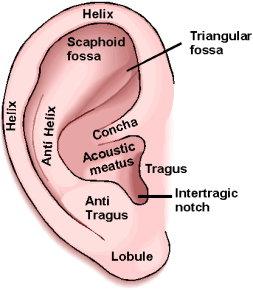 The Gow-Gates technique, described here, may, indeed, have been the way my periodontist did my last, partially successful injection. Note that Doctor Spiller calls the external target for the tip of the needle the “intertragal notch” (the notch between the tragus and the antitragus), while the illustration he provides labels that structure “intertragic.” Today, looking back, I consider my experience in the chair to have been troublesome rather than tragic. In a few weeks I shall return to that chair with my ignorance reduced; I’ll estimate my fear as the day gets closer.

My dentist approached the chair to crown one of my favorite teeth. I am a retired orthopaedic surgeon—and a fearful dental patient. I smiled sadly, and opened. 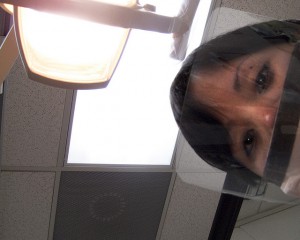 This is just some anesthetic gel, she said, and tucked a swab up where she was going to work. I nodded my understanding. She has good hands; over the years she has done what I have needed done without hurting me much. But I don’t like that ‘just.’

When she removed the swab, I proposed a challenge. Could you get through a day of patients without saying ‘just?’ She grinned. I can get through one patient, she said—but moments later, syringe in hand, she said, This is just the Novocain…

I, too, learned to say ‘just’ to my patients before I did things to them, especially when they were frightened or I thought I might hurt them. My teachers—IV techs, nurses, interns, residents, attending surgeons—set that example, both when we worked on the wards together and when they worked on me. Under the guise of informing the patient of what was coming, they assuaged their own discomfort with causing pain. But saying ‘just’ felt wrong to me, and when I was the patient I experienced such utterances from caregivers as phony, self-serving rather than helpful.

Good old Dr. Anderson, my childhood pediatrician, had white hair, pink cheeks, and rimless glasses. When I needed an inoculation, he absented himself from the room before his nurse wielded the needle. My parents praised that practice to their friends in my presence. The doctor doesn’t want the children to be afraid of him, they explained.

How dumb did they think I was? I knew who had given the order to hurt me, and contemned the adult who presumed not only to cause me pain, but also to deceive me about its author. His employment of another to stick me was the same kind of lie as my dentist’s needle-stick-minimizing ‘just.’

We doctors who do hateful things to patients hold postgraduate degrees in deferral of gratifications, so we believe that the patient’s long-term best interest justifies the pain or humiliation or expense we inflict. Or we mostly believe it. The part of us that fears pain ourselves or shrinks from inflicting it, the part of us our own aggression scares, wants to get past that as quickly as possible and return to being the kind healer everyone loves.

I find that ‘just’ counterproductive because even a child knows better. Unspun information builds better confidence: ‘This is an anesthetic gel to make the needle-stick for the Novocaine hurt less.’ To offer that truth shows the patient respect as it spares him the fear of the bigger, sharper, unqualified whatever-it-is we have up our sleeve—if we can just do it.