When I get caught up in a book, I’m apt to recommend it as if it were the best book I’d ever read, because at that moment it’s the only one in my head. David Grossman’s To The End of the Land grabbed me that way.

I want the friends I recommend a book to to share my experience undiluted and undistorted, to read the book as I did, unladen with either expectations or knowledge. This austerity infuriates my wife. Why should I read it, she demands, if you won’t even say what it’s about?

Okay. It’s about a family in a land at war, and what that does to those who go off to war, and to the others. The piece I want to hold on to for a moment appears when a boy between his childhood and becoming a soldier demands his parents explain to him where meat comes from. Wishing to spare their son that knowledge of killing, their awkward answer makes him a vegetarian for some years of his adolescence. That decision of his set against other decisions he makes, moved me, and ought to move you. Enough said.

To the End of the Land is set in Israel and translated from the Hebrew; its protagonists are Jewish; kashrut is in its air. A few weeks after I read it, I stumbled across Eat Not This Flesh, Frederick J. Simoons’s fascinating (I was going to say, ‘delicious’) scholarly account of food avoidances in many cultures through history. He explores people who eschew pork, or beef, or fish, or fowl, or dogs, or horses, and the religious, historical, practical and cultural reasons they do so. I couldn’t put it down. 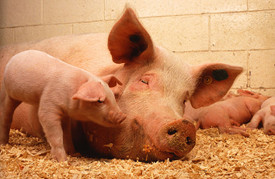 Let me offer you a taste. In 1973, Simoons tells us, nutritious, low-fat, reasonably priced, legally slaughtered horsemeat was subject to federal inspection, and a horsemeat shop in Connecticut set up fifteen franchises in New England and New York which sold 4000 to 5000 pounds a day. Tongans learned to like horsemeat from European missionaries, and from the mid-1950s (many of them Mormons) migrated to Utah, where they purchased horses to eat. This impaired their public image and made their children the butt of jokes in school. When in 1983, a Hartford, Connecticut packing company sold horse patties and steaks in Utah through the Harmon’s, Inc. supermarket chain, stock sold out quickly—until public protest by 200 horse lovers led Harmon’s to stop selling it and leave the Tongans on their own. (pp.192 ff.)

Or a bit further afield:

“Dog eating in modern sub-Saharan Africa is found mainly in the rain forest and adjacent savannas of West Africa and the Congo Basin, where to some groups it is a preferred form of flesh. […] Dog eaters in central Nigeria have special names for dog parts, which derive from a perceived resemblance between the dog and a Peugeot 404 station wagon. The dog itself is called 404 station wagon; its head, gearbox or loudspeaker; its legs, 404 wheels […]” (p.229)

For what it’s worth, I don’t think I’ve eaten a dog, but I found my cavallo in Puglia the sweetest pot roast ever. This should help establish my credentials as a cheerful omnivore. I wasn’t always: this skinny kid whose mother had a cooking disorder, as a New Yorker cartoon had it, grew from liking nothing into an adventurous eater, married a marvelous cook, and when I found myself responsible for feeding myself, I discovered that if I apply to making dinner about a third of the care, planning and attention to detail that orthopaedic surgery demands, the results will delight me, please others and nourish all. I like sharp knives, cast iron, good wines, and the savory better than the sweet. I admire the work of Michael Pollan and Mark Bittman. 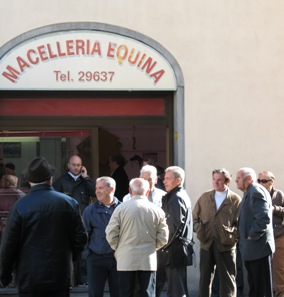 (I’ll write about appetite another time; despite everything, when I got out of bed this morning I weighed the same as I did the month Buddy Holly and the Crickets recorded That’ll be the Day.)

With all this in my head, I picked up Jonathan Safran Foer’s Eating Animals. Pollan’s The Omnivore’s Dilemma and In Defense of Food had made me aware of the subsidized corn monoculture and the evils of factory farms, and led a portion of a locally grass-fed beefalo into my basement freezer. Foer’s book, however, upset me. I hadn’t realized how completely factory farming, with its cruelty to animals, brutalization of employees and impairment of the quality and healthfulness of meat most Americans eat has replaced the kind of farm or ranch I thought my animal protein came from. And the way Foer writes about his concern for his son and the example he would set by eating and feeding him food from these places resonated with the feelings Ofer’s vegetarianism in To the End of the Land provoked.

Foer has become a vegetarian, and he has made me uncomfortable. Might I stop eating animals over these issues? I don’t think so, but the truth is that I don’t know. I frown on activists who don’t bear witness themselves: I stopped smoking cigarettes in 1963 in the era of the Surgeon General’s report because it would have been wrong to go to medical school as a smoker. Now I shall take more interest in where the animals I eat come from, and how they got here from there. I can cook hearty, tasty meatless meals that will satisfy me and many vegetarians, but the dinner table I share with another omnivore matters, too. Give up meat? For good? Is that what the question is?

2 Replies to “I Was a Cheerful Omnivore”