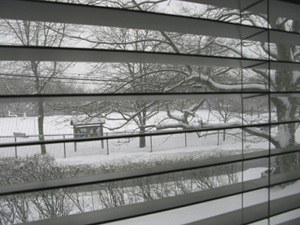 It’s snowing again, daylight pale, hues muted. I have set myself the morning task of writing another post, yet I find myself immobile, gazing out at individual snowflakes swirling through the spaces between the branches of trees, telephone poles, mounds of snow on cars; studying shapes, contours, textures. All that detail delights me.

Some years back, as part of an effort to see the world as it is, I set out to teach myself to draw. I bought a sketch pad, pencils and an eraser, and made all-but-daily efforts to render what I saw: strangers in public places, buildings and statues, landscapes, flowers, objects on tables. It was hard to do, and absorbing; it made the rest of the world fade out in a way that pleased me. Trying to render what I saw made me look harder, and as I did so, and moved the pencil on the paper, what I drew became my own. Ruskin was right: drawing also changed the way I visit art museums. Once I stopped comparing my results with, say, Ingres’s, I could enjoy trying to figure out how the master did what he did—but I also enjoyed envisioning what he must have seen, in order to draw it that way.

I think the trick isn’t in the doing, it’s in the seeing. For me, the hard part of learning to do surgery was not manipulating the tools, but seeing, and understanding, the structures that needed to be fixed. Once you get a good look at the problem (and that requires making the incision in the right place), you ought to be able to do something about it. After that some surgeons make it look hard, others make it look easy, and there will be differences in how things come out, just as two students copying from the blackboard will do so with different handwriting.

In any case, I took yesterday’s bright sunshine and uncommitted morning to make my first visit to the MFA’s new Arts of the Americas wing. Another time I may write more about visiting museums and about that museum. For now, let me say that during the hour before the school groups and their vocal docents arrived, when I had the nineteenth-century floor almost to myself, the richness of the collection overwhelmed me. When the alarm on my phone reminded me that I had to go home to meet the Orkin man, it was hard to tear myself away. 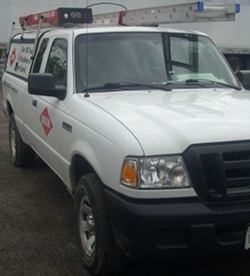 He parked nearby and rang the doorbell. He had negotiated pest control services with my wife a year ago, while I was away. After six pest-free years we had canceled periodic carpenter ant treatments only to find a thousand of them in a porch under repair two years later. When he came to control them, he found termites in the wood pile, though not in the house.

We exchanged pleasantries and started our tour in the basement. The treatment of pests in old houses was likely to be chronic, he remarked. I understood: it was something like periodontia. He chuckled. We swapped periodontist stories. Complete cures were an ideal, I said, and since I had been an orthopaedic surgeon, I knew whereof I spoke.

He fixed me with an odd squint. Oh, where did you work? I told him. You fixed my ruptured Achilles, he proclaimed. He told me his name. I studied his face. He showed me his (gratifyingly fine) scar. 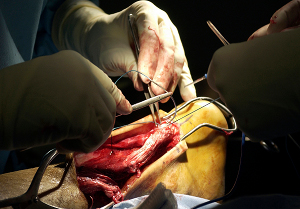 He had done so well that he had returned to playing over-40 league soccer until he ruptured his anterior cruciate ligament in another game, and after he recovered from that, he gave up soccer.

That he had done so well made me feel good. The moment was a welcome change from my habit of mind which remembers patients who did not do well more easily than the ones who did. It’s a habit I don’t like, but I haven’t been able to break it. The transaction with a patient has always felt more ‘over’ when he feels ‘completely cured’ than when he is left with symptoms, or can’t return to his previous level of function. Of course, who of a certain age can function the way he once did?

So maybe this bad habit of mind which has plagued me over the years is just another failure to see and accept the world as it is. I can’t help how I see things, but I am beginning to get the idea that the way I see them may not be the way they look to someone else.

One Reply to “Of Posts, Pests and Pasts”